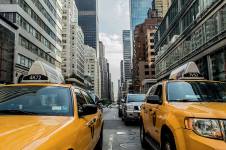 Uber, Lyft and other transportation are facing numerous regulatory and legal challenges to its operations worldwide.

In the Philippines on October 22, 2014 the Land Transportation Franchising and Regulatory Board (LTFRB) apprehended an Uber driver in a sting operation for driving passengers for a fee without a Certificate of Public Conveyance. The driver was fined PHP200,000.

The Metropolitan Manila Development Authority (MMDA) on October 23, 2014, advised the Land Franchising and Regulatory Board (LTFRB) to find ways to reasonably assist transport services like local Uber instead of suspending its operations and impounding them as colorum vehicles citing that such private initiative will help ease traffic in Metro Manila pending the availability of a modern mass transport system, among other things.

May 28, 2015 the LFTRB issued a series of Memorandum Circulars 15, 16, 17 & 18 stating the requirements for Transportation Network Companies and their drivers.

An extract of the Memorandum Circulars:

All of the TNCs will have to modify their apps to comply with the LTFRB terms and conditions for accreditation:

1. Passenger should be able to view driver’s name and photograph, the vehicle license plate number and the case number issued by the LTFRB.

2. The app must make the rate structure transparent before the passenger confirms the ride. It must display the total fare, fare range or rate by distance or time.

3. The app must include a complaint mechanism through which passengers may file complaints or report lost items and the hotline number of the LFTRB.

The TNC must conduct a criminal background check and screening of all drivers and issue them ID cards with photo.
All drivers must possess a professional Driver’s License.

Drivers must speak Filipino and English and undergo continuous training by the TNC on the use of the app, safety and standards, and terms and conditions applicable to them.

Once accepted by a TNC, drivers will have to apply for a certificate of public convenience (CPC) to a Transportation Network Vehicle Service.

As we can see it will not be easy to comply to with the accreditation requirements.

a) the BIR will require drivers if not working for a company to register with the Department of Trade and Industry as sole proprietorships and register with their businesses with the BIR and issue receipts to the TNCs. The BIR may disallow as a company expense payments to drivers who do not issue official receipts.

b) the use of the app by Uber’s Philippine’s subsidiary may entail Extended Withholding Tax on royalties and VAT payments.

c) There may be other tax issues depending on which payment gateway Uber uses and where its based, such as Extended Withholding Tax on payment gateways commission.

Foreign Ownership: the LFTRB allows a TNC to be 100% foreign owned, but the SEC has not yet issued an opinion on this matter. (The Philippines Foreign Investment Negative List restricts foreign ownership of transportation businesses to 40%.)

Department of Labor & Employment: In a Superior Court of California, County of San Francisco decision issued June 3, 2015, it was decided that a driver was Uber’s employee, even though Uber payment were paid to a corporation that she owned. (Uber Technologies Inc. vs. Barbara Berwick)

Taxi operators will keep opposing the TNCs, as they have lower franchise fees to pay the LFTRB.

Congressman in the Philippines wants Uber and other transportation and ride sharing apps to stop operations immediately.

Reasons given by various congressmen are:

Clearly, they are operating illegally said Rep. Raneo E. Abu and questioned why the Philippine National Police has not detained these illegal vehicles.

Rep. Estrellita B. Suansing said Uber should appear before the committee to explain their business model.
“Why are they being allowed to operate when they are only listed as system developer? They are not certified transport services,”

Also she stressed the fact that the LTFRB has a standing moratorium on the issuance of taxi franchise and how the TNCs should be taxed for the whole fare collected from passengers and not just the commission.

Rep. Philip A. Pichay said on the taxation issue, the tax allocation should be clear and that tax clearance from both the Bureau of Internal Revenue (BIR) and the Bureau of Customs (BOC) should be required from the TNCs.