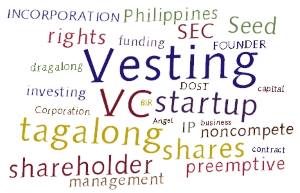 Most founder’s shares vest over a 4 year period with a one year cliff. The SHA may also include milestones where shares may also vest.

Single or double triggers clauses may also be included for accelerated vesting of part or all of unvested shares.  A single trigger could be the acquisition or a change of control of the company.

A one year cliff means, no shares vest until the founder has been with the startup for a year after which shares vest monthly.

a. Pre-emptive: when a corporation issues new shares of stock, every shareholder has the right to purchase a portion of the issue, in proportion to their respective shareholdings in the corporation, unless the articles of incorporation provide otherwise.

d. First-refusal: gives the other shareholders or the company the right but not the obligation to purchase shares that an existing shareholder proposes to sell to a third party at the same terms and conditions.

Some of the clauses of the SHA must also be included in the articles of incorporation and by-laws.

Corporation Code of the Philippines:

Section 98. Validity of restrictions on transfer of shares. – Restrictions on the right to transfer shares must appear in the articles of incorporation and in the by-laws as well as in the certificate of stock; otherwise, the same shall not be binding on any purchaser thereof in good faith. Said restrictions shall not be more onerous than granting the existing stockholders or the corporation the option to purchase the shares of the transferring stockholder with such reasonable terms, conditions or period stated therein. If upon the expiration of said period, the existing stockholders or the corporation fails to exercise the option to purchase, the transferring stockholder may sell his shares to any third person.

This is an overview of shareholder agreements between startup founders before business registration with the Philippines SEC, many other items may be included in a SHA that will allow a startup to grow while minimizing disputes between founders.